If it weren’t Karachi Biennale ’17, I wouldn’t have ever thought of visiting Narain Jagan Nath High School, the first public school established in Sindh in 1855. Before that, it was just another magnificent architectural building from the nineteenth century I saw everyday while passing through M. A Jinnah Road. 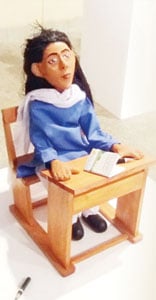 Upon entering the school, I was immediately cut off from the hustle and bustle of M. A Jinnah Road and was struck by the calm inside the school, which made it an ideal place to appreciate art.

Two identical mannequins standing opposite each other, one posing for a selfie and the other pointing a pistol towards itself, six screens on a wall that showed six different videos of people destroying weapons of warfare, broken guns strewn on one side of a wall and a highly disturbing soundtrack “Subh-e-Umeed” in the background politically charged installations that highlighted the misery and helplessness of innocent Pakistanis affected by terrorism. These installations made us uneasy and we began to crave for some light-hearted art. 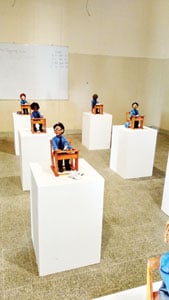 Another terrifying installation was a display of dead bodies run over by a car. I couldn’t stand there for a long time; those fake dead bodies were speaking to us about the people who had been the victims of violence in the past. Their dead bodies were left unattended in deadening silence.

Two video installations were run side by side by in a classroom were not for the faint-hearted. The video “Icarus” by Mithu Sen showed a dying bird being attacked by ants. The other video “Up to the big eye” was an installation by Guillaume Robert.

This brings us to a real classroom with unreal students, an installation by Ayaz Jokhio; as soon as you open the door, the miniature puppets dressed in school uniform with their tiny books opened in front of them stand up to welcome you. You close the door, and they sit down. The fun part was we made them stand up and sit down again and again until we realized that these cute puppets had a serious message for us: the real students are humans, so don’t treat them like puppets!

Outside the classroom, in the corridor, there was a massive display of amazing prints of abstract art. Zoom in, and you see images of kites, spin tops (latto) and slingshots in the prints; this installation celebrated the games youth enjoyed playing before the arrival of smartphones.

And yes, the cozy meteorite made of styrofoam was a performative installation at NJV School. The performers were not there to amuse us so we got close to the meteorite and tried to understand what it was and what message it had for us — and also took several pictures for studying it further at home.

Towards the end of the corridor on first floor of the school stood an installation by Sonya Batla; created with used bottles, bandages, wood scraps, robes, garlic, pomegranates, and other found  objects, this installation “recreated identity” in the current refugee crisis in 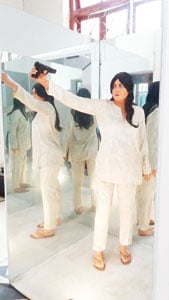 There were several other art exhibits in the school; in fact, every space was creatively utilized for setting up installations. We saw wire balls under the tree, stitched tires on the benches and even bikes with milk pots. At some points, it gets really difficult to decipher the implied meaning of these pieces, and we could only say “wow, this looks amazing” and move on. Contemporary art is complicated; young Pakistani artists have become sensitive to what is happening around them and they know how to respond to it. KB17 was just a display of their power!

“Over 140 artists from Pakistan and across the globe participated in KB17 and responded to a common theme: WITNESS. Chief curator Amin Gulgee conceptualized KB17 exhibitions with performances, screenings, and dialogue for charting new movement through familiar spaces. It was an occasion to participate in an aesthetic, intellectual and emotional survey of the city. The exhibits, installations, and performances disrupted the limits of our spatial imagination.” The main venue of KB17 was the 160 year old, NJV School building. This gave easy access to new audiences and also brought into discussion Karachi’s history, which has been often overshadowed by tensions of

With an architecture of exhibitions, discursive interventions and extensive visitor programmes during the KB17, art in Karachi combined creative energies and sparked new ones. (karachibiennale.org.pk)