Some of the participants have accustomed themselves to new kind of lines and colours; but for some, this is an experimental and learning process, like learning of a new language. Even the viewer has to learn this foreign language in the realm of art before he can judge their expressiveness and quality.

An interesting exhibition of image, sound, word and video was held at Amine Gulgee Gallery for two days only (February 20 and 21, 2011) attracting a large number of audience. The show was born of conversations held over nineteen months in and between cities including Cairo, Cape Town, Karachi, New York, and Paris. Amin Gulgee Gallery and SPARCK (Space for Pan-African Research, Creation and Knowledge) played key roles.

Amin Gulgee Gallery, established in 2000, bears the name of its founder, who is internationally known as a multimedia artist. Shows held at the gallery are anything but conventional. Amin and his gallery are not pushed about in being fashionable or palatable. As he says, “Objects and exhibitions displayed here are simultaneously explosive and imbued with spirituality, brash and private in extremes. They reflect deeply held views about the value of art as an absolute necessity- a challenge that brooks no limits.”

The show at Amin Gulgee Gallery followed the line of the collaborative galleries in letter and spirit. The artists engaged in the show used the latest tools of expression- audio-video technology, very suitable to the subject. Despite the use of new tools for expression, the inner man in the participating artists did not abandon the spiritual aspect of life and the world. As a modern artist Gulgee, through his curatorial show, gave expression to his inner vision of man and the spiritual background of life and the world.

In fact, the exhibitions at Amin Gulgee Gallery, specially the current one- “Imaging Cities” are thought provoking and raising questions. Gulgee calls the current show a South-South dialogue, which highlights the extraordinary wealth of urban practices shaping the present and future of the world full of countless possibilities. Herein Gulgee gathered around works by fifty artists hailing from some twenty countries of Africa and South Asia. All are world travelers in body or mind. They possess a universe of imagination and implementation. Their fundamental goal is to dream and build through art new, unexpected and sustainable futures in cities across the globe.

The views, aesthetics, and takes and counter-takes, however, are far from uniform. A great deal of variety and at times, elements of contradiction appear in the works opening doors for dialogue among the artists as well as artist and the viewer. This complexity has been the core of the curatorial project. These works are individual in the manner of representation, the style and quality. Some of the participants have accustomed themselves to new kind of lines and colours; but for some, this is an experimental and learning process, like learning of a new language. Even the viewer has to learn this foreign language in the realm of art before he can judge their expressiveness and quality. One can say that in this exhibition the art has gone across the limits of visual alone; it addresses man’s hearing and reading ability as well.

While judging a work of art, the critic’s mind tends to make comparisons. For instance an excellent video show of a nude male expressing agony through the twists and turns of the body in slow motion takes the mind to a painting where the painter puts hours to create something of similar depth and feeling. In this case, honesty demands that no such comparison should be sought as the two artists have used absolutely different tools. Video offers a wider space to the artist for expressing his thought than a canvas or paper to the painter challenging his capabilities.

Central to the project as well, has been a determination to evacuate clichés. Africa and South Asia both suffer from preconceived notions imposed upon them by the so-called First World – easy, inaccurate portraits of exotic, primitive and chaotic otherness. Also in need of evacuation are clichés that Africa and South Asia visit upon one another – preconceptions as to race, religion, social and economic class that result in profound and damaging misunderstanding. Here the viewer can make an assessment as to how for the artists have been successful in achieving the goal through the use of modern technology. 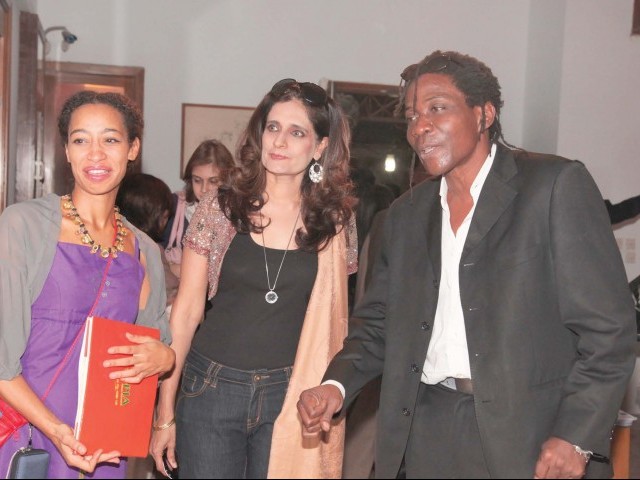 KARACHI: What do you get when you compress the work of 50 artists from 17 globally Southern cities in one night? One story.

“It was amazing to see the similarity in conversations between the two regions. Issues ranging from movements, relationships, traffic jams – everything is the same,” said Kadiatou Diallo, one of the curators of the mega show Imag[in]ing Cities that threw its doors open to Karachi on Monday, albeit for one day only.

Indeed, that is what hit Diallo when she went over the images and sound files artist Amin Gulgee sent to the Space for Pan-African Research, Creation and Knowledge (Sparck). Diallo founded this initiative in 2007 with Dominique Malaquais, who Gulgee knew from Yale University.

Malaquais believes that the urban future of the planet does not lie in cities such as Paris or London, but it is in the east, in cities like Karachi, Lahore and Douala in Cameroon. This is where the future of urban humanity is being formed.

Thus was born the idea of holding a series of conversations that gathered works of artists from Karachi to Cairo, Kinshasa to Algiers and Cape Town to Luanda. Diallo, Malaquais and Gulgee were painfully aware of the incorrect representation of countries such as Pakistan, China and those on the African continent. “Sparck is helping to shatter the misconceptions people in the west have about these places,” she said.

Sparck and the Amin Gulgee Gallery are only exhibiting in Karachi but there are plans to expand to Lahore and Islamabad.

Malaquais said that the show was dedicated to Goddy Laye whose work The Beautiful Beast was on display. The 45-year-old artist died of malaria on February 20, just a day before the opening of the show. “Goddy created the most important site for the study and creation of art in Africa, The Art Bakery,” explained Malaquais.

The current show is the second in a series of three conversations across Asia and Africa. The first one, which was held in China, featured the work of Goddy Laye and Bill Kouelany.

“He spent a month creating the most extraordinary video installations, the work is now shown in the back of taxis all over the world and has been displayed at art shows across the world, including Art Basel,” said Malaquais.

The third and final conversation will take Stacy Hardy, a South Africa-based artist to Dubai. “It is important for things to happen in Karachi,” remarked Gulgee. “Change is going to happen here, not in London.”