View: Out of The Box View: The springtime of youth View: Night at the Gallery “Why not do something like that here?” wondered Amin.

So he found two co-curators, Raania Azam Khan Durrani, founder of the Commune Artist Colony in Karachi, and Saba Iqbal, a sculpture and printmaking teacher at Indus Valley School of Arts and Architecture, and decided to make the idea become reality.

They sent out an open call to Pakistani art institutes, university departments and other friends and colleagues in Pakistan’s rich art network. The submissions came pouring in, but from the hundreds the curators had to narrow it down to only 64, a difficult task, as Amin writes in the catalogue for Fresh!

“I was very committed to representing artists who were not only producing conceptually and technically resolved work, but also those who show promise and are dedicated to their careers as working artists.”

And the search was lucrative indeed, in terms of the talent that they uncovered. Some came from trained backgrounds in large cities, others from small towns in all the four provinces. The catalogue explains it formally.

“We found the creative voice and visual language of a critical mass of Pakistani artists, specifically those at a turning point in their careers, ready to take off and make their individual mark on the national visual identity of Pakistan.”

But at the exhibition, Amin expressed that in a much more direct way, pointing out the young artists as they stood proudly in front of their artwork.

“Look! That artist is from Balochistan. That one over there, a really talented fashion photographer, he’s from Gujranwala. And the girl who made the condom dress, she’s from Malakand.”

Yes, a real live dress hanging from the ceiling, on the second floor of the exhibit, made of hundreds of (unused) condoms (Is it really protective? Malghalara Kalim). I gasped with surprise when I saw it, then chuckled and then leaned close to look at its design and construction.

Next to the dress, another artist stood next to a blue Samsonite vanity case and urged me to look inside the two peepholes she’d made. Inside were miniature hospital wards, complete with white beds and fluffy pillows and screens between the beds.

“I made this to show that memory is something you can remember, but you can’t go back to. You can only visit it in your mind in a very limited way,” she told me. (Hireath, Sidra Bukhari)

I recoiled in horror from a corner of the grand gallery where it appeared that leeches were crawling up the wall. These turned out to be made of iron (Maggots, Fatima Sabeekah). I admired a painting that made me think of Monet, then peered at the exhibition label only to realise it was called It Happened on Monet’s Bridge (Sehr Jalil).

I stopped in front of a large bulls-eye drawn in red paint, overlaid with newspaper headlines describing how many people had been killed in various bomb attacks across the country and the faces of grieving women painted at the bottom (Untitled, Iffat Tehseen Amjad).

There was a painting of small Balochi boys playing marbles in the dust (Nothing is Funnier than Unhappiness, Shabir Ahmed Baloch) with a background of pistachio green that drew my eye to it in the next room.

Next to it stood a sculpture that consisted of crystals suspended from the ceiling and ending up in a pile on a mirrored tile (Blood Diamond, I can’t seem to find the artist’s name).

If that wasn’t enough, there were performance artists walking around in costumes too strange to be described, and one who sat in a rocking chair with a veil of flowers over his face, knitting continuously. Then there were video installations, a film projected onto a wall (The X Line, Narjis Mirza), and an entire darkened box that you could walk into and stand to watch a film projected onto the floor (Room, TBP).

A DJ played ambient tunes from a MacBook and the gallery was filled with soothing tones and chimes, making me feel like I was in a very cool European art film while I was walking around the gallery.

I only learned on reading the catalogue that he wasn’t a DJ but another performance artist called Dynoman, whose music was actually a live performance, taking samples from the audience around him to feed into his electronic machines and synthesisers. No wonder the music seemed to change, growing and shrinking depending on what was happening in the room.

But there was no pretence and no playing at ‘cool’ for the young artists who buzzed around the room surrounded by family and friends. They were thrilled at having been given the chance to exhibit their work and to talk about their philosophy and vision. The catalogue, with text written by John McCarry, devotes one page to each artist and her or his work, and is worth reading.

It all vibrated with the energy of 64 young minds, who had been given carte blanche to express themselves with complete freedom, to let their imaginations run wild, to let their talent soar untrammelled. I thought about the generosity of Amin and his co-curators to give them the platform.

Who knows how many stellar careers will be launched from this night onwards?

But it was Pomme Shahbaz whose art design company Phenomenon was responsible for the publicity and execution of the evening, who encapsulated what made this show unique.

“The artists said that we were crazy to have let them do whatever they wanted. They couldn’t believe that they were being given complete freedom of expression. But look at what’s resulted from it…”

I nodded, taking one last glance around the bright gallery before I left.

Freedom of expression leads to art, beauty and energy. Isn’t that what life is all about? 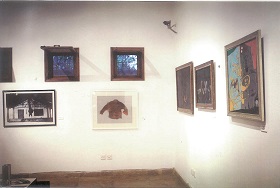