NOTE: If you are viewing the site on a Desktop device, you may view related videos and links by clicking on the blinking information box icon at the bottom right-hand corner of the individual Performances that have them. On a Mobile device please scroll to the bottom. 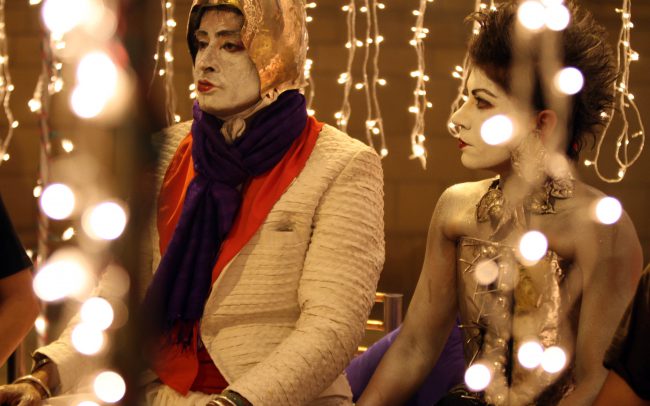 Amin Gulgee began formally engaging with performance art over a decade ago. As NuktaArt observed, “In Pakistan, where Performance Art is an emerging field, a handful of artists are incorporating it in their practice. Among them, Amin Gulgee has been at the forefront.” Over the years, he has staged over a dozen performance works in Karachi and Lahore, Dubai and Nagoya, Kuala Lumpur and London.

Zarmeené Shah noted in her essay “An Expansionist View: Amin Gulgee’s Practice” for the online journal Art Now Pakistan, “Where the connection with fashion is often overlooked in the context of Amin Gulgee’s involvement in performance art in recent years, an organic line of growth can be traced back to these shows in the early 2000s.” These shows included Alchemy in 2000, Sola Singhar in 2001 and River Dreams of Alexander in 2006. They pushed the boundaries of traditional fashion shows by using the catwalk as a platform to display not only Amin’s jewelry and sculpture but also to incorporate strong narrative and performance elements. Amin stopped making jewelry in 2007 and his involvement in fashion waned. His interest in performance, however, only continued to grow.

Early performances include The Healing, which took place in Karachi in 2010 at an event honoring the late pioneering artist and gallerist Ali Iman. For this work, two men carried Amin’s prone body through the assembled audience and placed him on the lap of a seated woman. She tenderly shaved his head, handing his hair to the two men, who ritualistically burned it in the flames of lit torches. This cathartic act saw Amin slowly rise to his feet and dance.

Another was entitled Love Marriage and was part of a group show called “Band, Baja, Baraat” that was curated by the Karachi gallerist Sameera Raja at the Indus Valley School of Art and Architecture in Karachi in 2012. For this work, Amin and fellow sculptor Saba Iqbal sat poker-faced in a ten-foot steel cube strewn with fairy lights–he wearing a metal helmet, she wearing a metal bustier studded with nails, both created by Amin–as the students of IVS played their boisterous baraat, or wedding party. Audience members spontaneously sat next the “couple” and posed for photographs, just as one would at a conventional South Asian wedding. Throughout the performance, Amin and Saba, their faces painted an identical Kabuki white, wordlessly broke eggs into one another’s hands.

In 2014, Amin created two other performance works that dealt with gender. The first was entitled Paradise Lost and took place on the grounds of Karachi’s Frere Hall for Art Fest 2014 that was co-curated by Sameera Raja and Adeela Suleman. For this piece, Amin and choreographer and dancer Joshinder Chaggar set ablaze sheets of cotton that sheathed Amin’s installation Char-Bagh, a four-grid steel structure from which 77 individually created bronze leaves were suspended. As the fabric burned, Amin and Joshinder repeatedly called out one another’s names. By imagining a ritual that might have taken place thousands of years ago at Mohenjenadro, Amin attempted to take the viewer back to man’s earliest dreams and raise questions about what it means to be a man or a woman.

Amin continued working with Chaggar for Where’s the Apple, Joshinder? This was a 45-minute piece that was performed by six dancers and two musicians at the auditorium of the Karachi Arts Council later that same year. The choreography of the piece took place inside the same installation that had earlier been used for Paradise Lost and was divided into three acts: “Inside the Char-Bagh,” “Outside the Char-Bagh” and “Becoming the Char-Bagh.” In this Garden of Eden, age-old stories were told about beginnings and how the relationship between men and women evolved and developed.

Amin’s long-standing interest in both curatorship and performance work converged in January 2013 when he conceived “Riwhyti: One Night Stand.” This evening of performance art was a collateral event of the Fourth ASNA Clay Triennial. For this happening, Amin invited over 30 Karachi-based artists to simultaneously perform individual performance works over a two-hour period at Amin Gulgee Gallery. In December 2014, he and Zarmeené Shah co-curated “Dreamscape,” also at the artist’s gallery. This was an exhibition of installation and performance art by over 50 artists from Karachi and Lahore. For the inaugural Karachi Biennale 2017, Amin as Chief Curator included a strong performance element, after instigating an Open Call.

Amin’s most recent performance works have been integrated into displays of his sculpture. For “Washed Upon the Shore” at Canvas Gallery in Karachi in 2016, four separate performances took place on the night of the opening. In one, Erum Bashir, dressed in white, slowly rolled through a room of coal. In another, Sunil Shanker ritualistically deloused Joshinder Chaggar. In another, Syed Ammad Tahir marked the bare chest of Ali Junejo with green paint. In another, artist and musician Zeerak Ahmed, perched on steps behind a menacing display of nails, intoned into a microphone. For “7,” an exhibition of Amin’s sculpture that travelled in 2018 from Wei-Ling Contemporary in Kuala Lumpur to Amin Gulgee Gallery in Karachi to Galleria d’Arte Moderna in Rome, performance became an integral part of the itinerant installation. In Kuala Lumpur, for a performance entitled “The Beloved Sun,” Suraj and Aziz, childhood friends from Guinea, sat on a carpet on the night of the opening talking to one another in a language that no one at the gallery could understand for a period of four hours. And in Karachi, for a performance called “Love Letters,” the visiting public was invited to write a declaration of love on a piece of paper and slip the message into an amber-colored bottled and place it against any one of the gallery’s walls. These messages, which remained strictly private, were destroyed at the end of the show.