Following the slippery contours of alphabets, craning and unfurling, they become visual orators of a fractal monologue. Pinning and pulling them together to find that they have become a residue; cohesive in their elated state of ambivalence. Roaring with slippery symmetry, alphabets parading without a guise of a word; rampant and unabashed; a vexing tale crafted in copper and zest. An opera seized in a moment of time, the alphabets poised like

acrobats, held hostage to a state of steady symphony.

Amin Gulgee, a name that ushers with it a monolithic flair. A reigning magician in his own right, he has foraged 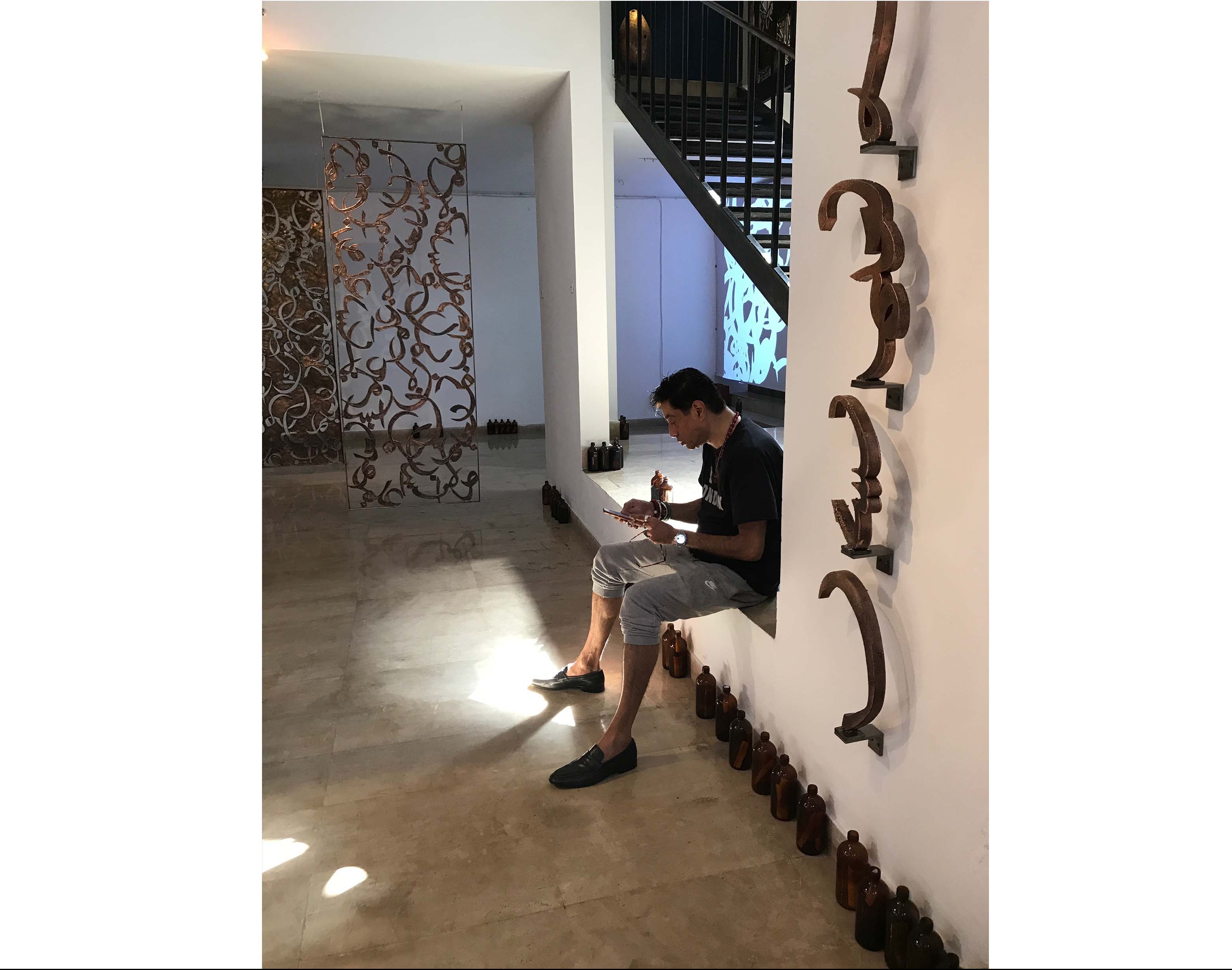 resides unhinged on the brittle facade of yesteryear.

Like a pandemonium collected in momentary relief, the air around him ripples with brazen clamor. Frilled with opulence and unabashed gusto, Amin Gulgee is a powerhouse strung with operatic flair and robust whimsy.

A recently concluded show at the Amin Gulgee Gallery titled ‘7’ was an ensemble of the artist’s recent work. The show flippantly stands on a tepid binary of the personal and the public. Rooted in the fifth verse of the 96th Chapter of the Holy Quran (“The Clot”) translated as “taught man which he did not know” is the jugular of Gulgee’s sculptures. The intial verses of this chapter were the first to be revealed to Prophet Muhammad p.b.u.h; it is an auspicious moment that celebrates knowledge and man’s humility.

Gulgee asserts that his personal relationship with the line, almost an obsessive one, has manifested into a profound state of incoherence over the years, yet the testament to the origins stay with him. Deconstructed and reconfigured over the years, resigned into a visual exercise. A constant reiteration; condensed into a latent state of recluse. An intrinsically personal endeavor into a spiritual state of cognizance. While inconspicuous, the language merely functions as a cryptic code; a momentary relief for the content that has been dissected into a state of prudent introversion.

The verse has been broken into seven parts; reconfigured and arranged into spatial entities. Alphabets poised atop one another in demure grace, an earthen offspring of a manic pursuit. Through his musings the viewer negotiates with the private and public binary within the manifestation of the work.

Gulgee also laid out a carpet of coal with alphabets strewn with steady tact. He asserts the coal as an earthen element, elected for the sake of it’s humble virtue. The work itself, laid out in grandeur, is a sanctimonious gesture towards the profound state of simply being. Gulgee’s work has a primal quality; a quivering virtue guised in subtle poetics.

This exhibition is set to travel to Rome later this year, Gulgee muses about the work being set in a moment of time, as it becomes a nomad traveling to foreign lands it will resign to a different moment in time.

Like an ancient breath stringing beads along a febrile thread, the clink of the beads against one another as they are strung together, slipping into a state of continuity..the works assume a tranquil quality of being held together by an imagined reality; resting in consort, a state of harmony and salient equilibrium. Braving through the winds and vagaries of time it shifts with each witness.

Gulgee also invited the viewers to leave notes in bottles which would later be destroyed; this engagement allowed for the personal to be confronted within the diction of his work; the curtains left open for a still moment, the viewer becomes a bearer of secret knowledge that is revealed only to be destroyed without it being heard.

The secret stolen moments and the symphony of the acrobatic alphabets made for a transcendental experience. As words become alphabets, the content becomes a insurgent witness to a sacred quest, the folly of man-made languages set against the profound state of experiencing sans conditioning..thought in it’s elemental state, incommunicable, but elongated through the breadth of it’s pursuit.

To conclude in Zarmeene’s words “This moment of the personal is at the core of this body of work – where the origin, the idea, the process, and the manifestation, all are internalized, absorbed within the self to once again be iterated anew (it is only when that which we know is forgotten, can we then begin to learn once again). This then is at the heart of Gulgee’s practice: a search for the unknown through acts of remembering and forgetting, constructing and deconstructing, fracturing, rupturing and reconfiguring, again and again: repetition, difference, différance.”1