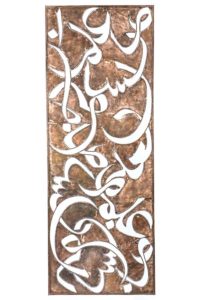 There is an apocryphal legend regarding the origins of drawing. It speaks of a young woman in Corinth whose lover was going away. To remember him, she traced the outline of his shadow on a wall and thus created a drawing. Going beyond the romance of this legend, we may consider the line or mark-making as a representation of what is absent or unseen. From the dynamics of absence and presence, we can extrapolate another dynamic – that of the visible and the invisible; that which cannot be seen relies on signs to express its truth. And this brings us to Amin Gulgee’s sculpture series with the pithy title “7.”

The preview of “7” was presented by Amin Gulgee and Sameera Raja at Gulgee’s eponymous gallery. The exhibition is scheduled to travel to Rome in summer, where it will be shown at Galleria d’Arte Moderna.

The artist has given visibility to the ineffable quality of love in the form of a secret code that consists of seven letters. These letters reconstitute themselves multiple times as whole or fragments in the form of Gulgee’s sculptures. They are visible representations of what is concealed. Love or perhaps a broken heart is the source of inspiration. But like the earth-embedded roots of a tree, the source remains hidden.

The selection of seven letters has been made by Gulgee from a particular sentence which he chooses not to disclose. The meaning of the sentence is poignant and deeply personal. From his distillation of seven select letters, emotions are translated into three-dimensional form and embodied in the frozen choreography of calligraphy. Amin Gulgee’s “7” has taken impalpable emotion and embodied it in sculpture. The recall of emotion transforms from the subjective space of memory into the objective reality of architectural space.

Working in copper, Gulgee has created several different forms of sculptural installations which use the seven letters as building blocks. There are hanging screens, slender, free-standing upright sculptures and individual letter fragments used in wall and floor installations. The monumental quality of the work creates a huge architectural impact. 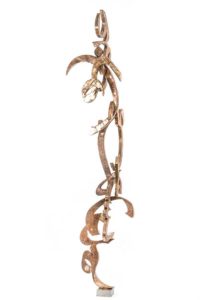 The rectangular screens — which Gulgee refers to as scrolls — are suspended from the ceiling like veils. Some are perforated with letters cut out of the solid background, while others have solid letters that stand out against a perforated background. The scrolls slice through three-dimensional space with the laciness of a skeleton leaf. The shadows they cast on the floor create a dialogue with the scroll and the viewer, as they alter according to the angle of the light and the viewpoint.

The upright sculptures are created by stacking the seven letters into miraculously balanced pillars. They remain upright through internal

balance rather than reliance on base mounts. They are part of Gulgee’s appropriately-named Ascension series of sculpture.

There is a large floor installation (approximately 10’x26’) in which coal lumps form a carpet. Strewn throughout the “carpet” are fragments of the seven letters. They glow like burning embers from the charcoal background into which they are set, reminiscent perhaps of the embers of past love.

Amin Gulgee has made an intuitive choice to express himself through the number seven. He speaks of the seductive quality that is inherent in all numbers having a profound appeal to him. The number seven has the property of being a prime number and has other mystical associations in mythology and culture.

An interesting accompaniment to the sculpture is a video that replays the infinite patterns the seven letters make as they move on the screen. They coalesce into near blackness and then retreat into filigrees of black and white. Amin Gulgee has worked with a programmer to devise a special algorithm to create the video. The constant movement of letters is hypnotic. It evokes the flow of memory and the recall of emotion that erupts from the subconscious, intuitive mind.

Another play on the idea of the hidden message was the interactive performance at the opening of the show. As viewers entered the premises, they found note paper and amber-tinted bottles placed on a table. They were asked to write a “declaration of love to a person, place or thing (past, present or future)” on the paper and insert it into the bottle which they could then place against the walls of the Gallery. The messages would be destroyed at the end of the show without being read. Thus, the viewers were coaxed into become participants in an act of secrecy such as the secret that is enshrined in the flowing sculptural forms in “7.”