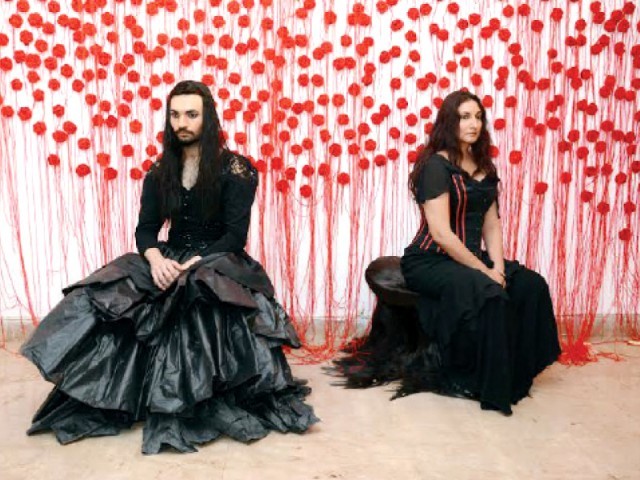 Muhammad and Manizhe Ali sat in mourning wearing black with a backdrop of a wall covered in roses made of yarn. The piece was dedicated to the children who had lost their lives in Tuesday’s militant attack. PHOTO: COURTESY AMIN GULGEE GALLERY

Muhammad and Manizhe Ali sat in mourning wearing black with a backdrop of a wall covered in roses made of yarn. The piece was dedicated to the children who had lost their lives in Tuesday’s militant attack. PHOTO: COURTESY AMIN GULGEE GALLERY

KARACHI: Walking through the skirt of a mannequin, on Thursday, was like stumbling into a never-ending dream. The first thing you saw two women having a tea party very similar to the one held by the Mad Hatter.

A few steps ahead, Summayya Jillani was painting on people – creating a live painting by using the audience as her canvas. Her performance piece was titled ‘This is Not a Painting’ and was not something she usually works with.

Leaving Jillani behind and walking into the Amin Gulgee Gallery, the world seemed to turn upside down with Seema Nusrat’s piece ‘Entangled’. The installation was hanging from the ceiling – chairs, shoes and newspapers made one feel like they were on the set of Christopher Nolan’s Inception. It looked like anything and everything was possible.

These performance and installation pieces were part of a seven-month effort made by 50 artists, including 35 Karachi-based artists and was curated by Zarmeene Shah and Amin Gulgee.

The crowd, limited space and a lot of art made it feel like the audience was lost in a Dreamscape – which lasted two hours and was also the name of the show.

“It is a cross pollination of ideas,” said Gulgee while explaining how one artist’s work affected others. “The inspiration came from a Yoko Ono quote, ‘A dream you dream alone is only a dream. A dream you dream together is reality’.” He added that the event was like when a workshop meets curation – a place where theatre artists, fashion designers, musicians and fine artists collaborated with each other.

There was no time for monotony or stillness as the art kept moving. From bumping into the artists who were hanging on ropes attached to the ceiling in a piece ‘The Sound of Silence’ by Sunil Shankar and Kashif Hussain, to stumbling upon two men fighting over a woman in the act ‘Welcome Home’ by Umber Majeed.

There were nearly 50 pieces of art everywhere, including, Raania Durrani and Zain Ahmed’s performance piece ‘Bed of Memory’ which was about Tuesday’s incident in Peshawar where more than 140 lives were lost. They shed their jewels – which depicted the act of letting go and loss. They initially started working with the idea of memory and when militants attacked the Army Public School, they were so moved by it that they decided to make it about loss and collective mourning. Saba Iqbal’s performance piece, ‘A Way to Somewhere Else’ was also about loss. A group of artists wearing white clothes were sitting in mourning at a funeral in silence. Muhammad and Manizhe Ali also sat in mourning wearing black with a backdrop of a wall covered in roses made of yarn. The piece was dedicated to those who had lost their lives in sectarian violence and the 132 children of Peshawar who died in Tuesday’s militant attack.

Just when one left the mourning reverie, Ammad Tahir ‘Sleep Talking’was a chilling experience. He kept walking around and whispered words like death and pain into the ears of anyone who he came across.

Bilal Nasir Khan’s interactive installation ‘Centre of Gravitiy’, was all about music and movements. Using a web programme which registers movements through a webcam – Khan converted the audience’s movement into music.

Away from the music and movements, was a bed inviting the audience the chance to lie down with the artist and watch a dream projected on the ceiling in Shalalae Jamil’s ‘Things that Happen in a Bed#1.’

“I’m happy to see such engaging art and performances happening here,” said Humayun Memon, a photographer. “This is definitely a first for Pakistan. Not sure if we have had such a massive collective of major performance / installation pieces in one place.”